In the Iraqi center.. A discussion about the repercussions of raising the Kurdish flag over government buildings in Kirkuk.

On the Tuesday of April 4th 2017, the symposium of the Iraqi Center for Media Development was held, where the repercussions of lifting the Kurdish flag over government buildings in Kirkuk was discussed. The symposium hosted the deputies Jassim Mohammed Jaafar and Mohammed Tamim to weigh in on this matter in the presence of a large group of politicians, MPs, experts and media. The event was held to discuss this sensitive and vital matter as the attendees stressed on the national constants, first and foremost being the preservation of the unity of Iraq and the need to resolve the contentious problems through dialogue and understanding within constitutional and legal mechanisms and reach, and disallowing solo decision makings and ignoring partners, as what had happened in Kirkuk…

We have been part of the Iraqi Center seminar, which was hosted by the Minister of Interior…

In the forum of Baghdad for intellectual and national dialogue.. What’s after ISIS.. ?? 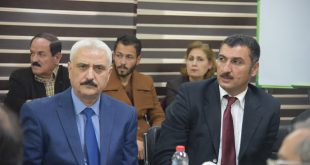 Cultural activities and discussions that discuss the post-ISIS stage…

Tweet I have previously attended a meeting with a group of experts, academics and media ...