What was not declared in Al-Abadi’s visit to Washington…

Diaa Al-Wakil / Advisor and former spokesman of the Armed Forces

Despite the declared aims of Dr. Haider Al-Abadi’s visit to Washington, the truth is the visit had different and more critical and important priorities that what was lead to be believed… first of all is the strong political persuade of the Prime Minister towards minimizing the conflict and fixing the crack in the Baghdad-Washington relationship for reasons related to managing the file of operations and battles against ISIS. The truth behind the conflict that grew bigger recently began after the objection of Washington over the timing of the Tikrit battle and their suggestion to the Iraqi government to postpone the battle or wait a little longer with what they described as the lack of ability and combat readiness of the Iraq forces as their excuse. What counts for the Iraqi government is its patriotic decision to go into the battle ignoring that suggestion which led to the stop of the air support of the alliance and therefore stopping the operations more than once until Washington responded grudgingly to the request of the Iraqi government resuming the air strikes (in the scalpel and not the hammer way) with the objection of some of the parties participating in the fight… And the Iraqi Forces managed with the help of the PMF to achieve an important victory and a big military achievement in the battle against terrorism, however the events that followed the liberation and had claimed the occurrence of “violations” raised Washington’s displeasure which added a new conflict point filling the relationship with more controversy, reservations, and objection…

And that is firstly. Secondly, Washington had suggested that Al-Mosul would be the next step after Tikrit for military, political, and geographic reasons as they had described… but the Iraqi government decided to choose Al-Anbar for the next battle, which drove Washington –which has expressed its objection- to warn from risking the final outcome and the participation of the PMF in liberating Anbar via articles published on the pages of the New York Times magazine which is close to the US administration. And that means that the logistic, intelligence, and air support has become conditioned to the political stand of the US administration and their beliefs that relies on seeing what they describe as “the partnership with Iraq in the management of the file of war against terrorism and the necessity of understanding and agreement between the two sides in support and decisions…” and therefore the liberation operations are going through tough labor and unknown or perhaps surprising possibilities in regards to the American support which requires searching for new ways of cooperation and coordination to guarantee the success of the next battle…

Mr. Al-Abadi who admitted the occurrence of violations during the missions in Tikrit and promised to punish their committers, is facing a hard political task during his current visit to Washington… which relies on his wisdom and ability to convince the US administrations and its hawks with the following:

The sovereignty and independence to the national Iraqi decision..

The importance of providing weapons and support to Iraq for the success of the war on terrorism.. 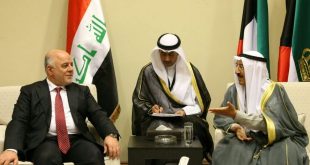 Tweet The murder of Colonel Bashir Al-Hamdani, director of the Air Force Club, and his ...